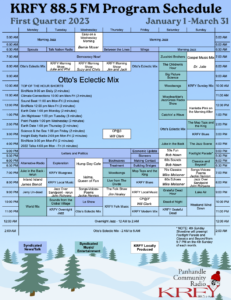 See what’s on air every hour of every day on KRFY! View above or click below to enlarge the daily program schedule, and read below for program descriptions. Got a comment or idea for programming? We want to hear it»

4th SUNDAY SHOWTIME – This once a month show, hosted by Don Childress, features the best of Broadway show tunes with commentary.

ALTERNATIVE RADIO – A public affairs program that provides alternative analysis and views of the news with David Barsamian.

BIG PICTURE SCIENCE – A program that connects ideas about the origins, the behavior, and the future of life and technology on earth in surprising and playful ways.

BOOKWAVES – Produced in Berkeley, California, this half-hour program is about books and their authors.

BUILDING BRIDGES – Radio from the grassroots, a weekly news magazine from community stations across the country.

COMMUNITY CONVERSATIONS – Locally hosted interviews, pre-recorded outside our studio and airing as a stand-in for our usual Morning Show that is on hiatus until coronavirus restrictions are eased.

CP at 3 –  Hosted by high school student Will Clark with content and music geared to high school age listeners.

EASY ON A WEDNESDAY MORNING – Ease into the new day with music to lighten the spirit – with host Bernie Moser.

ECONOMIC UPDATE – A weekly show about personal and global economy.

GRATEFUL DEAD HOUR – Sit back, relax, and enjoy an hour of Dead music from David Gans’ extensive catalog. David is one of the nation’s leading authorities on the Dead and has authored several publications on the band.

HARRIETTE PINK AND THE MORNING AFTER:  A mellow Sunday brunch show with an eclectic mix of classic rock, R&B, blues, folk, and bluegrass.

HUMP DAY CAFÉ – Host Velma Queen of Fun brings an extensive mix of blues, jazz, rock and whatever suits her to KRFY to entertain in the middle of the week.

JERRY UN-DEAD – The Grateful Dead was not the only band that Jerry Garcia played in. Chill out with Jerry as he strays from the Dead to play bluegrass, reggae, and blues with other musicians.

JUKE IN THE BACK – Between 1946 and 1954, rhythm and blues laid the tracks for what was to become “rock and roll.” Matt the Cat will share the records that you couldn’t hear on the jukebox in the front of the establishment.

LETTERS AND POLITICS – Host Mitch Jeserich from Pacifica Radio Network looks at burning political issues and debates, and their historical context within the United States and worldwide.

LIVE FROM THE DIVIDE – Originating from Bozeman, Montana, a “live” celebration of the American songwriter, focusing on local and regional songwriters.

MOP TOPS AND THE KING – An independent, one hour show featuring the music of The Beatles & Elvis Presley with some fun surprises.

MORNING SHOW at 88.5 KRFY – Locally produced and hosted interviews, events calendar, weather and current events to inspire and inform. On hold as of late March due to coronavirus restrictions. The Morning Show will return when it is safe to bring guests back into our studio.

SPROUTS – A weekly half-hour program that features radio productions from community radio stations and local media groups across the country.

SOUNDS FROM THE GLOBAL VILLAGE – Host Jake Longwell brings traditional, folkloric, and contemporary music, includes scratchy field recordings from the early twentieth century to the latest fusion of music and culture from around the world.

TREATMENT – In Hollywood, a “treatment” is a concise overview of a screenplay. Film critic Elvis Mitchell turns the tables and gives the “treatment” to some of the most influential and innovative forces creating movies, art, and entertainment.

WOODSONGS OLD-TIME RADIO HOUR – A live audience celebration of grassroots music and the artists who make it.

WOODWARBLER’S JAZZGRASS RADIO – Explores the sonic continuum between traditional bluegrass and all that jazz connotes in this two-hour weekly program.

ZUCCHINI BROTHERS – A weekly kid’s music show that is 100% healthy & fun, with a focus on self-esteem, health, and environment.